The footage, obtained by Nine News, shows the group of friends jumping or scrambling from the boat and stumbling along the jetty as thick smoke billows from the vessel. One passenger flees carrying a small child.

Witness Ed Hurdwell felt the explosion and said he heard “a loud bang and up it went, with people on board diving off”. 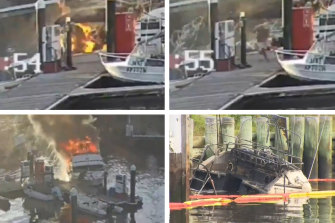 Video footage of the explosion shows passengers fleeing after the boat burst into flames. Credit:Nine News

NSW Ambulance Inspector David Morris said on 2GB on Monday that bystanders told them a mother and two-year-old girl had left the boat to get ice-creams and “thankfully, they sustained no injuries”.

He said the burns covered up to 60 per cent of the victims’ bodies, “sustained across multiple parts”.

Six patients were taken to hospital. Firefighters drove the ambulances to allow the paramedics to treat the victims while in transport, FRNSW said.

At Royal North Shore Hospital on Monday afternoon, a 27-year-old woman remained in a critical condition, while two women, aged 25 and 30, and a 33-year-old man were in a serious condition. 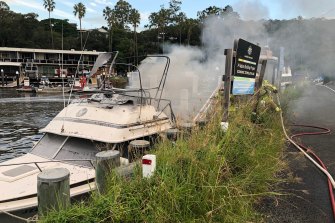 Two other patients, transferred from Westmead to Concord overnight, were in a stable condition.

Mr Bettenson said he screamed at people to get fire extinguishers and another person came aboard. 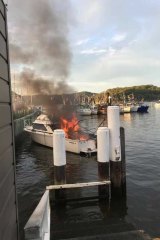 During the towing, he said the burning vessel ended up behind his boss’s boat.

“I kind of had to get it out of there,” Mr Bettenson said. “I don’t think the boss would’ve been happy.”

Equipped with a rope, he towed the “fully ablaze” cruiser into the middle of the marina, then saw the fire brigade and swung it around.

“As soon as it was drifting to them, I cut the front rope,” he said. “I took off to help with first aid with the burn victims. It just happened all so bloody quickly.”

He said King Tide Cafe staff had the victims outside and were trying to keep them cool. 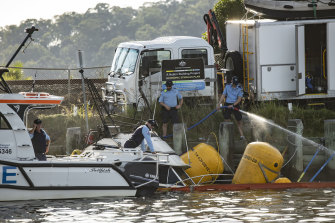 Water police, police divers and Maritime NSW attend to the boat that was engulfed by fire at Hawkesbury River Marina on Sunday.Credit:Wolter Peeters

“I stayed with one of the victims, who had some pretty nasty burns on both arms and legs, just tried to keep her company with her partner, tried to keep them both calm,” Mr Bettenson said. “The victims that got burnt, they didn’t get off lightly.”

He said as a father of five children, aged between four and 17, “I can kinda keep my cool and get stuff done.” 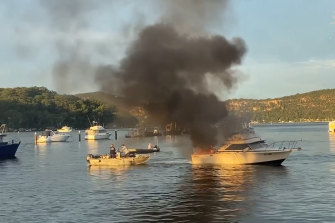 Rick Stockley, director and operator of Brooklyn Ferry Service contracted by Transport for NSW, said he understood the boat was refuelling and exploded “when they went to start the motor to depart”.

“Some sort of unfortunate accident has happened,” he said. “Fuel has somehow ignited and that’s set the boat up, obviously that’s what the investigators will be looking into.”

His business was shut for 10 days due to flood debris in the Hawkesbury River. It had been back for two days before it closed again, as containment booms enclosing the public wharf stop fuel and oil from the vessel, which sank about 6.55pm on Sunday.

“For us and for our passengers, it is a bit of an inconvenience but at the end of the day it’s about safety, worrying about the people that have been injured in the accident and making sure emergency services have time to do their job,” he said. “We just need to stay out of the way and let that occur.“

Police said Marine Area Command will eventually retrieve the vessel from the marina but a set timeline is unclear.

Our Morning Edition newsletter is a curated guide to the most important and interesting stories, analysis and insights. Sign up to The Sydney Morning Herald’s newsletter here, The Age’s here, Brisbane Times’ here, and WAtoday’s here.