There is no game. That image on your Nintendo Switch screen? It definitely isn’t a game. Those button prompts and the ability to interact with the digital sprites milling about the place? Merely part of a grand scheme to break the fourth wall, and proof that there is indeed no game to be played. After all, how can you be playing a game if you have no true control over your actions. There is no game.

And that’s the message to take home with There Is No Game: Wrong Dimension, a non-game that originally non-appeared on non-gaming digital distribution Steam last year. Or did it? Steam is for games. There Is No Game is not a game. And now it’s making its case once again on the Nintendo Switch, in an effort to convince gamers around the world that it has no game to offer at all. There is no game.

You might be tempted to describe it as the bastard child of an escape room experience mixed with the point ‘n click sensibilities of LucasArts during its golden age, but TISNG:WD will do everything it can to convince you that your linear thought processes are no match for its devious puzzles designed to convince you that you’re taking the wrong approach here. You’re trying to play a game, in an experience that isn’t designed to be tackled in that manner. There is no game.

Sure, the idea of being being confronted with impossible predicaments while a mysterious voice in the back tells you to give in may work better on the Switch, where its touchscreen features and portability make this title perfect for some head-scratching exercise while you’re in a cozy bed, and there’s something neat about seeing a bunch of vital clues just littering the bottom of your screen, but remember: There is no game.

Seeing a bunch of inside video game jokes mixed with more general humour and references to some of the best indie games of all time? That absolutely puts a smile on my face, even if the rest of TISNG:WD feels almost impossible to describe, because there is no game.

There Is No Game: Wrong Dimension

So what is this interactive story that I’ve been throwing my thumbs at, attempting to guide its fate while being exposed to cracks in the wall that separates its reality from mine? Is it an absurdly smart commentary of video games, a bonkers adventure to watch unfold, a slice of creativity rarely seen in the industry? Is it an experience that has to be felt to be understood, thanks to its talkative AI and whimsical approach? Whatever it is, one thing is for certain: There is no game.

There Is No Game: Wrong Dimension was reviewed on Nintendo Switch 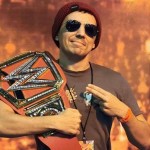 Editor at Critical Hit. Inventor of the macho Swiss gym chocolate known as Testoblerone. That’s…that’s about it really.

Tag: There Is No Game： Wrong Dimension